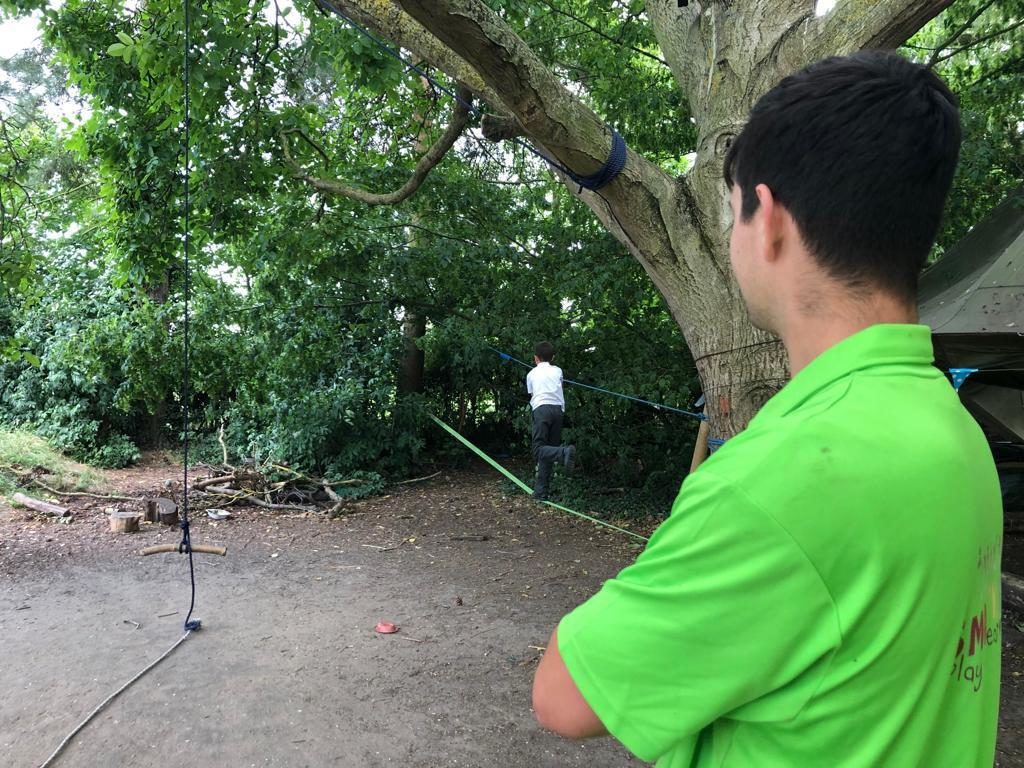 On Monday 8th July 2019 Dr Shelly Newstead, the founder of PARS Playwork, Common Threads and the International Journal of Playwork Practice, led a workshop entitled ‘PARS 4 Parents’. It was designed to give parents an understanding of the PARS approach taken by staff at Smartkidz Play and Learn.

What is an adventure playground?

The workshop began with participants being asked, ‘What is an adventure playground?’ The responses were varied, but confident, and included suggestions like, ‘A place with ropes and swings and trim trails.’

Dr Newstead explained that “proper” adventure playgrounds were conceived during WWII. They were developed in Denmark when families from rural areas moved into cities.

The playgrounds in the cities were designed by adults and restricted children to only perform certain actions, such as swinging or sliding. The arriving children were more used digging, “poking pigeons”, climbing trees and making stuff from objects they found as the mood took them.

Dr Newstead went on to explain that the role of ‘playworker’ became a job in the ‘junk playgrounds’ of the 1960s. Junk playgrounds later became known as adventure playgrounds.

PARS is a model of playwork practice that is built on the ideas of the adventure playground pioneers. The PARS model is currently being used all over the world, often delivered by local licensed PARS trainers. It is currently used in the UK, Hong Kong, mainland China, The Channel Islands, Australia and The Netherlands, with other countries coming on board soon.

The PARS training that Smartkidz staff have received is designed to enable them talk about, explore and evaluate their PARS playwork practice.

The workshop participants were shown a video clip from an adventure playground in the 1970s. This caused lots of discussion – one parent said, “That child looked about 2 years old, I couldn’t imagine my child doing that, it’s great.”

Adam, Managing Director of Smartkidz, mentioned that similar things are often seen in Smartkidz clubs, where there is a PARS culture of staff allowing the children to play without unnecessary adult intervention. Another parent said, ‘I’m amazed at how the children just got on with it.’ A teaching assistant added, ‘When I was a child, I used to be able to play outdoors in the street, but now children are not allowed to play out as much.’

The PARS model as a way to balance ‘adult structure’

The idea of adventure playgrounds was not to educate or develop children, but to give them a place to do what was important to them. Adventure playgrounds allowed children to temporarily exist in a world that was theirs, where they didn’t have to fit into adult standards of being structured and organised.

Shelly explained that ‘adult structure’ is fine and even necessary in many areas of the home and within the classroom, but that children also need time and space to enjoy their childhood and to play on their own terms.

When adults impose their ideas on children

The play, natural exploration and experimental behaviours of children often encounters ‘adulteration’ – the unnecessary imposition of adult ideas and priorities over children’s ideas and priorities. For example, ‘That’s a great picture but you have done the sky green and the grass blue. That isn’t the right way round.”

Parents attending the workshop found this to be an interesting point:

“This goes against the grain of what we think we should be doing. We should stand back more and allow things to take shape before getting involved as an adult.”

“Children have enough routine in their life and this is the time to allow them to be free.”

“I am a kid at heart and I like to get involved, but this says I shouldn’t be doing that?”

Adam mentioned that the opinions of adults often impacts on what is available to children in after school and holiday clubs. He has received complaints from neighbours about the noise made by children.

They mention shouting, messy shelters and even tell him that children shouldn’t climb trees. Adam was thoroughly disappointed when he received a follow up letter to a complaint saying that the after-school club was now more structured and quieter!

PARS training helps adults to see things from both children’s and adult perspectives. The PARS model doesn’t tell staff what decisions to make but supports them in how to decide whether intervention is necessary, depending on the situation.

These decisions can change in a split second and require focus on behalf of the PARS practitioner, especially when faced with forty children doing forty different things, as can be the case at Smartkidz settings.PARS practitioners do not stand around doing nothing, even though it might look like that! They observe, listen and reflect.

Whilst it might look like they are just ‘hanging around’, in fact they are making sophisticated decisions about whether to allow situations to play out or whether they should intervene, using 7 methods and 12 techniques contained in the PARS model. Given that all the children will be doing different things at different times, PARS practitioners may be making several different decisions at any given moment, which requires a lot of focus and concentration by the staff!

Participants found the session to be engaging, informative and useful. Here are some of the comments shared with Smartkidz staff:

‘A very interesting discussion, which was presented very clearly. For me, the most compelling part was that my teacher training (in the late 90s) did not cover this form of play to learn. In fact my teacher training was structured in exactly the opposite way. We would have benefited from an understanding of this methodology.’

‘I discovered also that the adventure playground model is valuable tool for all parents. We are hard wired to plan, control and expect tangible outcomes, which this format helped me question and provide an alternative to.’

Or visit our other playwork posts:

What are the Playwork Principles and Play types?

How does a Playworker Advocate for Play?

Playwork and PARS: My Training by Tom Nethercott

How can Forest School Training be used in a Playwork Setting?