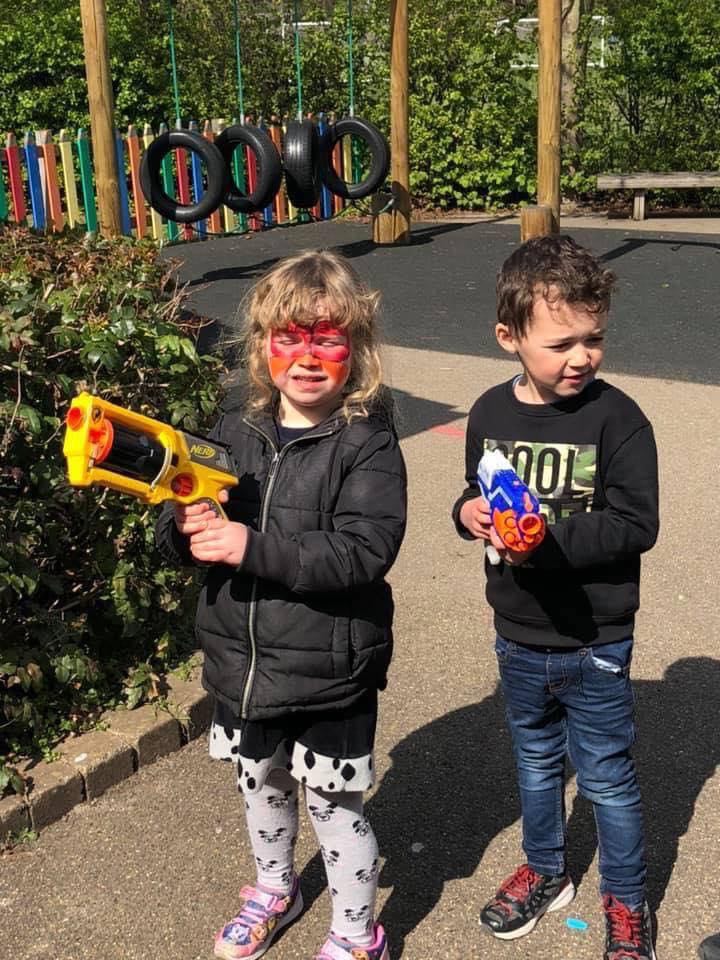 Children playing with toy guns or creating guns as part of their play can be seen as a complex issue. In the light of regular violent crimes reported on the news, adults may be concerned and even fear that play could turn into reality. However, gun play can also provide an important opportunity for children to better understand themselves and the world around them.

What is gun play?

When we talk about gun play it can relate to a number of scenarios. Gun play can describe children playing with toy/replica guns but it can also relate to using a pretend gun made from sticks, lego bricks, or even a banana!

Many of the concerns with gun play can also relate more widely to weapons play, or even aggressive play. Still, games involving pirates and swords, knights and armour or superheroes with immense power, do not often suffer the same stigma.

Why is gun play banned in some childcare settings?

Some childcare settings take the view that because killing or harming others is morally wrong, any promotion of or encouragement to engage with weapons is also wrong.

A very real concern of many parents is that if they allow their children to play with guns will this encourage them to be violent and aggressive and even use weapons in the future.

Is there a connection between gun play and violence/weapons use in later life?

Of the research undertaken in this area, there seems little or no correlation between a child being allowed to participate in gun play and the use of real weapons and/or violence as an adult. One study concluded that “rich imaginative play does not produce violence”. Some argue that at the age at which a child might engage in weapons play, they do not have much of a concept of a weapon as a method to kill or cause death or even what “killing” really means.

Rather, it is argued, that children use their play to work through the violence or weapons they see in the world around them. In some cases, it’s a way to navigate their concerns about the use of these weapons through play.

“I once said to my son, during playing with a nerf gun, ‘I hope you wouldn’t shoot me with a real gun from so close?’ and his reply was, ‘Are you silly! I would never shoot anyone with a REAL gun!’”.

What can be learned through gun play?

It helps children make sense of the world around them

Children will see violence, gun and weapon use all around them. It is in the movies they watch, their cartoons, their superheroes battle on a daily basis!; a few children see them being used as part of a rural lifestyle; some will see armed police or the army with weapons; others will have played computer games or physical games such as paintballing; some may even be aware of weapons use and violence in their own lives.

Engaging in gun play can help children process gun use, and potentially the violence that goes with it. It can help them to understand it, work through concerns about it and even learn about the consequences. Research suggests this is a positive way for children to explore their concerns and helps reduce anxiety.

It helps with problem solving

It keeps discussions about weapons or violence out in the open

Another argument to support gun play is that allowing it can prevent gun play becoming “tempting” because it is a banned activity. The suggestion here is that it is better this play goes on where it is out in the open, can be supported or discussed, rather than it becoming an act of subterfuge or something that only happens in secret.

At SmartKidz we believe gun play is a great part of a child’s imaginative and fantasy play and should be allowed to carry on if used in play. It helps children understand boundaries and rights and wrongs and gives them some understanding of the world around them.

Our approach stems from the Playwork Principles, PARS playwork and Forest School where play is child led with little, or no, adult intervention. This means we don’t actively encourage any sort of play because that would mean it was led by an adult. Therefore, children can use sticks, nerf guns (without the bullets), kinex and other construction resources, along with their imagination to engage in gun or weapons play. A Smartkidz leader would only intervene if there was an issue of safety.

The fear that a child engaging in gun play might then grow up thinking it is ok to shoot people can be a real problem for adults. But, when you consider that they grow and learn through play, a clearer perspective of its benefits can be achieved. Allowing children to use any type of play to develop and make sense of the world can actually be incredibly positive.