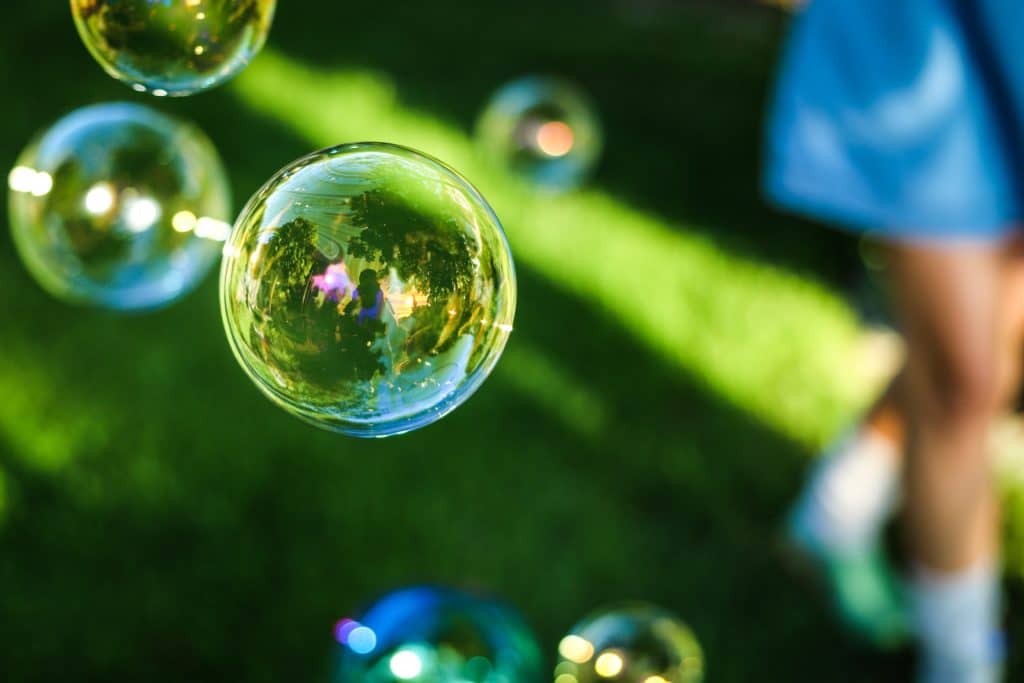 This is a memorable story of connecting a mother`s love through the uniqueness of play and the nature of playwork and bubbles.

The playwork approach is holistic and about expanding the individual child’s play experience and opportunities.

On this particular day, I had fourteen children in my care, ranging from the ages of five to nine years of age. Typically, in my house children have the free range of playing indoors and outdoors. I had the children around to do some observations regarding the dynamics of their play behaviours, within the parameters of their schooling, where they had been viewed as challenging and bullying.

As I have provided play opportunities for these children outside of school for four years and have a good foundation of personal knowledge in relation to the group it was appropriate for me to use my experience in this manner. I personally had found the dynamics of the children’s play to be positive and often observed them playing nicely together.

As I revel in naturally observing children playing, I sat down on the curb and began to blow bubbles with a mixture I had made. Typically, some of the children were curious about what I was doing, we had some discussions and they returned to what they were playing originally. One child ‘Suzy’ had barricaded the next-door neighbours drive with her babies, prams, clothes and highchairs.

However, ‘Emily’ stayed with me chatting and blowing bubbles. She started to explain, that her mummy does not live with her anymore, describing that she lives high in the sky, in a place called heaven. I have known Emily since she was two years old and she is now six. Her mother had lost her battle to cancer when Emily was only three years old.

She proceeded to say, “granny says she is always watching over me, but I get sad because I can’t see her”. We carried on blowing bubbles whilst she talked. Then one bubble started floating high into the sky. She shouted “look the bubble is going as high as the sky where mummy is”. Then the bubble burst and a sad, lost, expression appeared upon Emily`s face.

I said to her, “I think your mummy caught the bubble”. She had a puzzled expression at first then shrieked “yes she caught it, that is why it burst”. We started to blow lots more bubbles into the sky, so her mummy could catch them, and we decided to send the bubbles up, with lots of hugs and kisses for her mummy to catch. This made Emily very excited and happy.

A few moments later a bubble landed on her hand, she looked shocked. I said, “Oh look mummy kissed your hand” and then another burst on her cheek. Emily touched her cheek and said, “Mummy kissed my cheek”. Then we began to blow lots and lots more bubbles, that Emily, was surrounded. I said “see you are surrounded by mummy, giving you lots of hugs and kisses.” Emily was twirling round, bursting with excitement, embracing herself with her mother’s loving touch.

Suddenly a bubble landed on my cheek, we both looked shocked. Emily said, “my mummy is giving you a kiss now”. I asked, “why would she be giving me a kiss?” Emily said, “I think she is saying thank you, for making me feel better.” She then skipped off merrily singing and joined ‘Suzy’ to play with their babies.

We have one moment in time, to make a difference in a child’s life and to make it a positive or negative experience. Be kind and gentle and spread a little sparkle into the life of a child. That’s what makes play and our work as adults important to extend the individual child’s play, supporting and nurturing their cognitive and emotional development.